I am particularly interested in the analytical and numerical modelling of the statistical properties of complex matter ranging from biological systems to powders.

My current research interests are:

Evolution of the mean packing fraction during a tapping experiment described as a fix point on a jamming curve (Mol.Phys. 2013)

Defining entropy for granular materials: linking packing structures to minima of an energy landscape and their probability of occurrence to the size of their corresponding basins of attraction enables one to define a protocol-dependent granular entropy (PRL 2014)

Dynamics of a protein next to a DNA segment

Sketch of what is believed to be the general behavior of most DNA-binding proteins around DNA. The effective use of different modes of  displacement is believed to enhance the search time for a specific target on DNA (Adv.Prot.Chem.Struc. 2013)

Mapping of the problem of demixing two polydisperse systems onto that of resetting one bit of information with a certain probability of success (J. Stat. Mech. 2014)

Competition between curvature and line tension in the phase separation of a binary mixture on a triply periodic minimal surface (Phys. Rev. Lett. 2016). 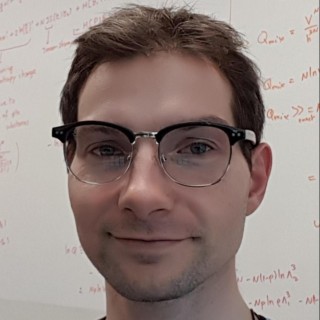 I am a theoretical and computational physicist. I am a senior lecturer in the School of Maths and Physics at the University of Lincoln. My interests lie in the modelling of complex matter, ranging from biological systems to powders, and in the foundations of physics.

From my other blog: The Oblivious Physicist

“Chaos as physicists’ plans to know the future crumble”

Putting the controversy over atomic-molecular theory to rest